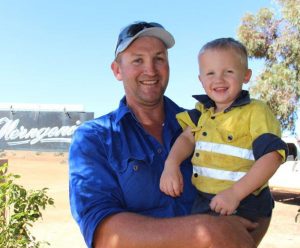 The Burford family came to Australia from England in 1838 as free settlers.  The family and property has a long and interesting history in the Peterborough region of outback South Australia.  Merngenia Station, having survived droughts and rabbit plagues, is today a productive wool growing property some 38,000 acres large.

Run by 6th generation Michael Burford, Mergenia Station has an annual rainfall amount of between 200 and 300 millimetres and requires careful management.

The property currently runs around 2,600 dohne and merino sheep running on open shrublands of predominantly blue bush and salt bush. Maintaining the diversity of flora and fauna in conjunction with the wool growing operation has been a key management strategy.  The property boasts a rare and endangered stand of 400 year old Purple Mulga (Acacia carnei) which was only recently discovered and is now being  nurtured and preserved.

Michael said he enjoys being a wool growers because of the many ways in which wool can be used.  Michael is also hoping to spark a wool growing interest in his two young boys, Brodie and Brock, so that one day they too can continue the family’s tradition of growing modern merino wool and perhaps find even more ways to use wool.

Q. What does it mean to you to know who is wearing your wool?

A. I think it’s important that people know where their wool has come from, who grew it and far it has come from.

Q. What would you like to say to the person wearing your wool?

A. “I grew and harvested that!”